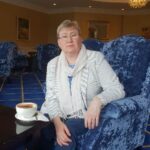 My name is Vera Smyth. I am a professional member of the Irish Translators’ and Interpreters’ Association. I graduated from University of Tver (Russia) with a Master’s Degree in English (Teaching and Translation).

I worked for Aer Rianta International Moscow Duty Free as a translator and interpreter before I moved to Dublin. I now work in the Arts Office of Dublin City Council.

I have been interested in languages from a very young age, it must have been when I was 5 or 6. I found it fascinating to hear sounds that I didn’t understand. That made me curious to learn and be able to understand and speak this language. My parents studied German at school and remembered it pretty well, so they taught me the first words and expressions. A friend and I used to sing to a hair brush in a ‘foreign’ language. The only problem was that we couldn’t sing together as we were making up different words!

In school our class was assigned English and I enjoyed it to such that I was teaching my mum as I learned it myself. Years later my mum found this very useful when my parents came to visit us here in Ireland. I think it was in school when I realised that I would like to have a profession in some way connected with languages.

But the realisation of what I wanted to do in my life came during studies at the university. Among many subjects there was a course in Translation in Practice where we attempted to translate well known pieces and had discussions about each other’s versions.

One of the key things for me to become an interpreter was a level of confidence in speaking the language. Some courage is also required to be able to speak freely and not to think that people around would listen and judge. This confidence comes at a certain level of professional development and it took me some time to get there.

It is widely underappreciated by the general public that the ability to speak a foreign language does not automatically make the person a translator or interpreter. Translation skills, in my view, are acquired with the study of the language at a professional level and with an in-depth understanding of the structure of both the source and the target languages.

It is also important to point out that interpreting requires a different set of skills. A short-term memory needs to work very efficiently, quick thinking in difficult situations, like how to interpret “untranslatable”.

Specialisation is another aspect of work. In most cases a translator/interpreter is expected to possess vast knowledge on a variety of subjects. I think specialisation can help to improve the quality of translation. The more you know about a particular area, the more understanding you gain and this leads to higher standards of translation.

I really enjoy working with general types of texts, such as guides, information leaflets, pieces on art and culture. I also very much enjoy translating poetry. Recently I translated a book of haiku by the poet Dermot O’Brien. It was a challenging and very exciting project. For a few years I was one of the main organisers of the Festival of Russian Culture in Dublin and enjoyed interpreting guided tours of the permanent collection of the Hugh Lane Gallery.

To me the best thing about being a translator/interpreter is to connect people and to make them understand each other. I also like the opportunity to be a part of interesting projects and to see places  I would otherwise never have seen. The downside is that a translator and, even more an interpreter, becomes a tool of communication. There is a danger of losing their identity and sometimes this could present itself as an inability to have their own opinions on matters.

My advice to people who are thinking of choosing a career as a  translator/interpreter would be to believe in yourself, be professional and be prepared to help people to communicate with each other.