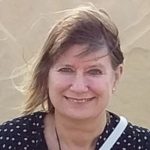 While my day (and/or night) job is as a Dutch-English/English-Dutch translator, fiction writing combined with environmental journalism is my dream job. After translating full-time for almost 20 years I was spreading myself too thinly. Luckily, I was able to drastically reduce my translation workload late last year, due to sweeping changes in my personal life. My work/life balance has improved and I have become more of a digital nomad. A welcome side effect is that most deadlines are set well in advance whereas ‘being ambushed’ by offers I felt I couldn’t refuse was a problem in the past. The clients I have retained are few but the relationships tend to be long term – I believe in ‘going the extra mile’. Among them a financial research company (since 2004) and two music festivals (since 2007 and 2014, respectively) plus some artists and composers.

An actual career has never been high on my list. The term suggests a ruthless climb up the ladder of power as part of a social hierarchy whereas I prefer to be a footloose freelancer (sometimes on a contract basis). It suits me. The downside is a lack of security. Before moving to Ireland in 1997, while active as a (music) journalist/fiction writer, it was sometimes hard to make ends meet. The work tended to be time-consuming. As he looked at the tax returns one day, my accountant remarked that quite a few of his clients – mostly authors and journalists – were translating ‘romance books’ under pseudonym as a sideline to help pay the bills. “I can do that,” I thought as the English language had ensconced itself in my brain when I had to learn how to speak it at an English primary school aged 10, having been thrown in at the deep end. I applied for a test translation on the assumption it would be a piece of cake. It came with a long list of instructions. My handiwork was almost rejected when I ignored most of them (the writing was a bit silly) but I was allowed to revise the test and was accepted eventually. That was the start of a successful career, of sorts, as a part-time translator of romantic/steamy novels. The work was badly paid and involved serious abridging as the texts needed to be shortened by approximately 10% (Dutch is more verbose than English). The latter was something I balked at initially but after a while I could do it almost automatically (a description here, unnecessary dialogue there) and it gave me a false sense of editorial control.

It was far from typical translation work, I now realise, and not just in terms of content (some of the series feature fairly explicit erotic scenes). I kept using these books as a kind of financial safety valve even when I was already doing far more heavy-duty (and better remunerated) translations, mainly for agencies. I can no longer bring myself to do it but the question how closely the end result should resemble the original text continues to be relevant. The answer differs per client and sometimes for each text (the translation of a contract requires detailed adherence to the source whereas a PR campaign for the same company will only work if it reads well).

The internet. An advertisement in the local paper did nothing but I found many clients online or they found me through job lists or profiles. Although I came across my first ‘serious’ client – an American translation agency in Galway – via an ad in the Irish Times but that was at the end of the 1990s when the ‘real world’ and online activities were far less integrated. I went all the way up to Galway by bus from West Cork to shake hands with the PM and get a tour of the company! That wouldn’t have happened even a few years later. I have worked in a ‘virtual office’ for 15 years alongside a German colleague in France. We chat sometimes – especially when something goes wrong – but have never met in person. It still feels as if I know her and can trust her, which is quite weird if you think about it but in a positive way. The large – and expanding – information resources that are available online are another positive. I love research.

Do you think you need to specialise?

That partly depends on your mindset. The advantage is that it is possible to work faster once one is well-acquainted with a certain idiom/environment. The potential disadvantages are boredom and/or becoming too dependent on certain clients/sectors. I had a can-do attitude and was inclined to accept many of the assignments that came my way in the past, whatever their nature (with the exception of glyphosate, which is an evil substance). The content was very wide-ranging: Fashion, medical equipment, hairbrushes, motorcycles in Japlish, politics, Venice Biennale, marriage certificates, subtitles, automotive error codes, ethics campaigns, agricultural machinery, pizza labels …. However, every linguistic domain you enter has its own terminology and the searches can be very time-consuming so I am happy to focus on just a few areas. But it has been very informative. I also did a large number of Dutch (oral and written) language tests for major multinational companies (via a very pleasant translation agency). This entailed having intense 12-minute conversations with strangers from around the world to gauge their ability to use language as a tool to provide services to other strangers. That, too, is a specialism but within this lies a wealth of real-life experience.

What have been favourite assignments?

They include a dispatch written by an eyewitness to the Battle of the Boyne on 24 July 1690. Military manoeuvres do not interest me much but there was a certain thrill in the realisation that the writer (an envoy) was describing what he had just seen with his own eyes all those centuries ago. Almost a fly-on-the-wall experience; a 17th century Netflix documentary (or travelling back in time). In addition, I like working with artists or composer and/or writers who operate in these areas they tend to be very particular in their choice of words and to care deeply about form, content, and language. An interesting assignment has been a series of composer monographs for the annual November Music Festival in the Netherlands. And last but not least an article by Leo van der Markt about the Uccello paintings by Ton van Os, which was fiendishly difficult to translate but made me feel, once the thorny translation issues had been resolved, that I had learned something essential about the universe.

How important are training and qualifications for a career in translating/interpreting?

The proof of the pudding is always in the eating. Personally, I did not study translation (or writing) at college. Like many people who choose either profession (or both) I have always been vaguely aware of a linguistic aptitude, ability, and affinity. A love of reading. Let us say an appetite for language (just as others may have a propensity for maths or mechanics or music). On top of this, I was lucky enough to be immersed in two additional languages at a young age. My paternal grandmother had fled Germany and hardly spoke any Dutch (while I didn’t even realise she spoke a different language) and I somehow absorbed the English language my mother took me to England for study reasons. It came naturally and never left; embedded semantics that continue to evolve. A valuable potential translation tool.

Of course, skills need to be honed and raw talent needs to be harnessed but something has always held me back from ‘outsourcing’ that trajectory to official educational institutions. I prefer the challenge of having to deliver ‘for real’. It spurs me to perform better and overcome fear. When entering the field of journalism as a newbie (or intern), there is a form of mentoring and the same thing happens at some translation agencies; especially those affiliated with a university. I think this must be where the real learning takes place; i.e., in practice.

Very few people are capable of becoming fluent in a language through purely theoretical means. When doing language tests I regularly came across candidates who had graduated after studying Dutch at a particular Eastern-European university for four years or longer without spending any significant periods of time in the Netherlands or Flanders (Dutch-speaking Belgium). Very few could conduct a simple ‘normal’ conversation that would make someone looking for customer services feel comfortable. And the girl who had worked in a clothes shop in Utrecht for four years, without doing any formal language courses, outshone them all.

The worst are deadlines when you need them least (for example, at your son’s wedding).

The best moment is that sigh of relief after meeting a deadline. Free at last (for now)!

If you are looking for additional work, take a good look at the services sector, which continues to expand. Assessors are often required. Or you may be able to identify other needs and missing links in your language (e.g. localisation of tests and other materials) by talking to someone at HR.