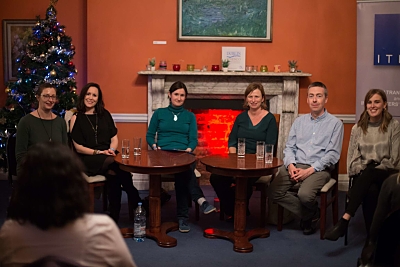 The past couple of months have been busy for the ITIA, with the association’s AGM in October followed by an appearance at the Think Languages event in Dublin’s Convention Centre and the Christmas get-together.

The October AGM began with a panel discussion moderated by Executive Committee member Elaine Jennings on starting out as a freelance translator or interpreter and marketing your services. Five experienced professionals – Anne Fox, Karl Apsel, Annette Schiller and Adam Brożyński – gave their takes on becoming a freelancer, client acquisition and financial planning (their key tip: find a good accountant).

Following the panel discussion, ITIA Chair Mary Phelan presented prizes and certificates to the deserving winners of our 2019 Translation Competition for post-primary students. The winners all agreed that translating was more of a creative challenge than they had anticipated. We hope it was a challenge they enjoyed – and that some of them go on to work with languages in their future careers.

Fast-forward to 6 December: the association was once again reaching out to post-primary students, this time at the Think Languages event held in the Convention Centre Dublin, which was set up to showcase the benefits of learning a language. The students and their teachers had the opportunity to stop by our stand in the exhibitors’ hall to find out more about how to become a translator or interpreter. Several students told us they had seen a live interpreting demonstration for the first time at the event – and they were impressed by the mental acrobatics on show! Perhaps some of them will be inspired to take up the profession themselves, assisted by the information on third-level study options that the ITIA provided.

That very same evening, we held our Christmas get-together. The evening began with another panel discussion, moderated once again by Elaine Jennings. The participants this time were five translators and interpreters from the European Commission: Audrey Ann Flynn, Caoimhe Alliot-Stenson, Morag Neath, John McGartoll and Aisling Ní Chatháin. They shared their insights on recruitment, training (including intensive language courses to bring them from ‘beginner’ to ‘pro’ in just 12 weeks) and daily work at the Commission with a packed house of ITIA members.

After the discussion, attendees had time for some professional networking accompanied by mulled wine and wonderful festive snacks, courtesy of Penelope Eades-Alvarez.

After closing 2019 on a high with these autumn and winter events, we look forward to another busy year in 2020 – watch this space!

CPD: Getting to Grips with GDPR