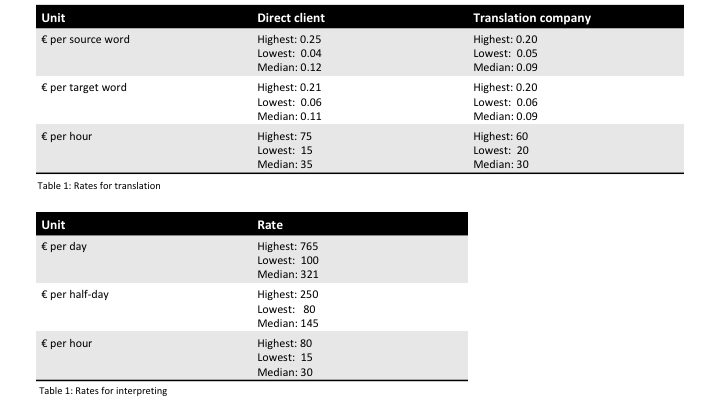 The respondents spanned a wide range of language combinations, with the largest number of responses being for major European languages such as English, German, French, Spanish, Italian, and Portuguese. Translators were asked to report their various rates per source word, per target word, and/or per hour for translation, editing/revising, proofreading, and/or post-editing services, as well as indicating whether they charged a minimum rate. Interpreters gave their rates per day, per half-day, and/or per hour, and indicated which interpreting settings they worked in, i.e. business meetings, conferences, public service (courts/police stations, hospitals/GPs, refugee settings, social welfare, education) etc.

The overall highest, lowest and median rates across all language combinations were as follows:

We would like to extend a big thank you to all respondents for taking the time to provide us with their information, without which the survey would not have been possible. The full results of the rates survey, including detailed breakdowns by language combination, interpreting setting etc. are available for download in our website’s section on Articles and Reports.