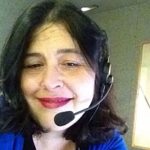 I moved to Ireland to learn English when I was 18 and discovered that I had a flair for it. I met my husband and decided to stay and study for my BA degree in History and Geography from a Spanish university while living here – but only after spending a year in Paris studying French. I did not know about interpreting at the time; I just knew I enjoyed learning languages!

My first working years were spent teaching Spanish as a foreign language in Ireland. I enjoyed it but I was not interested in furthering my training to become a full=time secondary school teacher. During the years I was studying and teaching, I was also a volunteer in Amnesty International. I have always been interested in human rights and I was particularly drawn to Latin America, due to its cultural links with Spain. I was fascinated with its cultural movements and its struggles for justice. In post Franco Spain, artists and activists from movements such as Nueva Canción Chilena were still a huge source of inspiration for certain people of my generation. Travelling to Latin America was always on my mind, so in my early thirties I decided to spend a year and a half in Chile and the Dominican Republic as a development worker.

This was to be my single most important career move. My job title in Chile was “interpreter” and as such, I was the link between an environmental expedition / youth development organisation from the UK and the local authorities and media. I soon realised had discovered my calling! I loved every minute of it. In the Dominican Republic, my role was more strictly that of a development worker, but I was often called upon to interpret for the organisation’s funders (English speaking) and the local project management team, local communities, local authorities, etc. I just loved both – interpreting and development / solidarity work.

My work in Latin America also opened up another career opportunity in the field of solidarity – my other passion – and in April 2000 I got a job as Information Officer in the Latin America Solidarity Centre in Dublin, where I worked as Information officer until Sept 2003, when I became the organisation’s Coordinator until 2014.

So, for 14 years I combined both careers. Eventually, in 2014 it became too much work and I decided to focus on interpreting only. In 2016 I took up the post of part time interpreter trainer in NUIG. Another job I love!

Doing an MA in Conference Interpreting was no doubt the most important career decision I made. As soon as I graduated, DCU Language Service (which at the time used to take on conference interpreting work) contacted me in order to include me in their pool of freelance conference interpreters and soon after I started to get work from DCU.LS and from other Ireland based agencies. Later, word of mouth and colleague’s recommendations brought me to the attention of other agencies outside Ireland.

Years later, becoming an AIIC member gave me another career boost, since it opened doors to new clients and it gave me the opportunity to work with AIIC colleagues more often, leading to more work from word of mouth.

How important are training and qualifications for a career in translating/interpreting.

In my case, hugely important. However, becoming a professional conference interpreter with no formal conference interpreting training – even though unusual – is not unheard of. But it does require finding yourself in the right circumstances: a market lacking in interpreters or a mentor willing to train you in, for example. In any case, highly developed language skills and nerves of steel are a must!

How do you find clients?

Word of mouth, mostly. Also, featuring in the AIIC professional members’ directory is a source of work. Colleagues and agencies use it to find local AIIC interpreters when organising conferences for their clients outside their own country.

I have at times approached agencies outside Ireland but with very little result.

Conference interpreters could not possibly specialise – as in focusing on one sector only – as they would not find enough work. Variety, such is the nature of interpreting for the private market and – as far as I am concerned – it is what makes it exciting!

However, at times clients require previous experience before they hire an interpreter. When that is the case, the interpreter might find herself / himself working regularly for clients in that particular sector, hence “specialising” to a point.

I love interpreting for human rights / solidary / social justice workers, trade unionist and activists. I am lucky enough to have contacts in that sector in Ireland thanks to the years I worked in the Latin America Solidarity Centre.

Another very enjoyable type of assignment is anything to do with culture. More specifically, I thoroughly enjoy working at the Irish Spanish and Latin American (ISLA) literary festival organised annually by the Instituto Cervantes in Dublin.

I also love meetings with a social element to them: urbanism, eco-tourism, inclusiveness, minority languages…. Not only do I love those topics, but also delegates attending these meetings are normally passionate about what they do and they afford me the opportunity to learn about innovative, creative and forward-looking initiatives which at times challenge the way I think.

What I love most about being an interpreter is the variety of assignments, which means we are constantly challenged to learn more and to improve our language skills. We never stop learning!

Also very enjoyable is the opportunity to work both from home (preparing and researching the conferences) and outside, as part of a team. I thoroughly enjoy the collegiality and teamwork. I think I am very lucky to work in Ireland, where – the market being small – I get to work regularly with the same colleagues, which makes for a tight, friendly and supportive team. However, I also find working with new colleagues in other markets exciting, and I have made good friends outside Ireland. So far, I have only had positive experiences with everyone I have worked with.

Last but not least, I love the fact that interpreting gives me access to different people, different initiatives, different concerns, different struggles, different world views, different realities… I consider myself to be in a very privileged position when clients are happy with my performance and appreciate my work, bearing in mind that they might have had to trust me with delicate, important or confidential matters.

The worst thing about being a conference interpreter in a small market such as Ireland is the fluctuating nature of the work and the fact that you must either have many other clients abroad or have an alternative income, much as I love – and have loved – my other jobs.

Is it possible to have a good standard of living?

Working only in Ireland it is not possible to have a good standard of living from conference interpreting alone. At least not every year. Interpreters must combine interpreting with other careers (translating is an obvious choice) or have clients outside Ireland, such as the EU institutions or interpreting agencies / recruiting colleagues based in other countries. The nature of the career is global so you need a passport to earn a good living.

Build strong language skills and deepen your knowledge of the culture(s) linked to your working languages.

Get training as an interpreter. Those who succeed without training are few and far between.

The MA in conference interpreting in NUIG is currently the only course of its kind in Ireland and the only MA in the world where you can do conference interpreting with Irish as part of the language combinations. The MA in NUIG has a memorandum of understanding with the EU institutions with whom it works in close cooperation in the delivery of the classes. The EU also supports the NUIG’s MA trainers in the development of their skills. For example, I consider myself lucky to have attended the EU Commission’s Training for Trainers course – a programme very few people have done.

Collegiality, professionality and networking will bring your career much further than any campaign to introduce yourself to agencies, as word of mouth and colleagues’ recommendations are the main source of work in the private market.

If you are interested in working for the EU institutions, find out the current EU language needs and apply yourself to learning (some of) those languages. Interpreters with Gaelic as a mother tongue are currently in very short supply there, for example.

Be prepared for a lifetime of learning. Having a curious mind is a must.

Finally… be prepared to enjoy it!